Sailing in first place with a result of $59,040 was “Bateau à l’ancre” by Edouard Vuillard. The composition was in tempera on brown paper and measured 16 inches by 14 inches. It was sold to an American trade buyer from New York ($30/50,000).

ASHEVILLE, NC — For its first sales of the year, Brunk Auctions offered nearly 900 combined lots in an Emporium sale on February 4 and a Premier sale on February 5. Over 95% of the lots were traded successfully and $1,962,000 was made at the time the hammer fell on the last lot.

“We were extremely pleased with our first cross-category sale, First of the Year,” said Nan Zander, managing director of Brunk, auctioneer and specialist in American fine art, photography and fine art. American Indian. “It far exceeded its high estimate, with excellent bidding from the US, UK and Europe… We’ve had a great start to the year.”

The highest price achieved was $59,040 for an impressionist painting by Edouard Vuillard (French, 1868-1940) titled “Bateau à l’ancre”. The work came from legendary French art dealer Durand-Ruel and was being sold to benefit the Sheridan Wood Nicholson Revocable Trust to benefit environmental charities. The auction house confirmed that David Dufour, a New York art dealer, was the buyer.

Zander said Old and Continental Master paintings in general had a great day, as evidenced by the $49,200 result of Otto Sommer’s (German/American 1811-1911) “The Bear Fight” of 1864. A private Western art collector, bidding on the phone, fended off competition for the grizzly scene. A 16th-century Tuscan School portrait of a red-bearded gentleman more than quadrupled its high estimate and sold to a European buyer for $38,400. It came from a private collector in Virginia who acquired it in the basement of a Florentine palace during the Florence floods of the 1960s. Also of Italian origin, a bronze bust from an Italian school in the 17th century depicting a saint whom a European bidder, competing by telephone, won $31,980. The catalog suggested that it may have belonged to the circle or a disciple of Alessandro Algardi (Italian, 1598-1654).

“We saw enthusiastic bidding for Art Nouveau, Art Deco and art glass,” Zander recalls. This was certainly the case with a figurative fish vase in iridescent glass attributed to Croatian designer Antoinette Krasnik (1877-1956) for Loetz. The 6½-inch-tall vessel had swum across the block at Sotheby’s New York in 1990; bidders were lured by his $600/900 estimate and he was chained down by a European bidder for $34,440. Other notable art glass findings would be overlooked without mentioning a Tiffany Damascene and Intaglio Art Glass Table Lamp ($20,480), a Cytisus Neurot Loetz Vase ($15,990), and a Glass and Bronze Pendant Tiffany millefiori ($16,640). 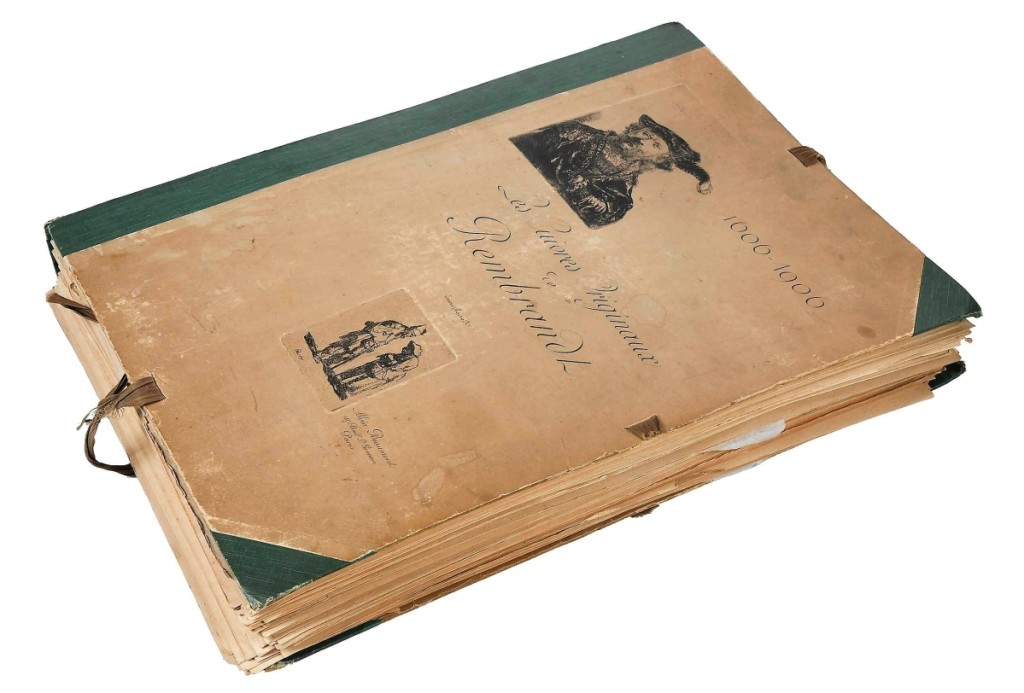 Rembrandt’s Brass, Rimpression des Planches Originales presented a complete set of 80 etchings, including 78 by Rembrandt. It was edited by Alvin Beaumont and Michel Bernard and published by Imprimerie Chaponet in Paris in 1906. The rare volume was from the Humber family and sold to an American bidder for $31,980 ($20/30,000).

A major collection on offer in the two-day sale was that belonging to the Humber family of North Carolina. While most of the collection was on sale at the Emporium, a rare 1906 edition, Rembrandt’s Brass, was offered at the Premier sale and sold to an American bidder for $31,980. It included 80 etchings, 78 by Rembrandt; the volume, along with another from the Humber family that Brunk Auctions sold in October 2021 for $39,360, had been acquired by Robert Lee Humber while living in Paris, circa 1920-40.

The Emporium’s highest prize was the last lot of the day and also belonged to the Humber family. A private American collector has paid $24,320 for an early 20th century bound volume with more than 200 indexed signatures of dignitaries, composers, artists, athletes, actors, world leaders, inventors and scientists, including that of Queen Victoria, Charles Dickens, Jack Dempsey, Charlie Chaplin, Winston Churchill and Thomas Edison, to name but a few.

Another standout feature of the Emporium sale was a selection of over 60 works by Louis Orr (North Carolina, 1879-1961), many of which depicted Southern locations. Prices ranged from $320 for an engraving from Heinz Memorial Chapel in Pittsburgh, Penn., to $9,840 for a set of 50 copper-engraved plaques from Orr’s North Carolina Landmark Series, and $8,610 for “Playmaker’s Theatre, Chapel Hill, NC University” done in graphite on paper.

Prices quoted include the buyer’s premium as quoted by the auction house. For more information, 828-254-6846 or www.brunkauctions.com.